Today I’ve been able to test a few things that were left behind.

The Sun showed during all the morning but it was difficult to have even just 1 minute free from clouds. Strong wind created problems taking clouds all around the sky and also making the tubes quite “unstable”.

Anyway I’ve been able to do a quick comparison between the Coronado BF5 and the Lunt BF12. Results are not as I wanted them to be. It seems like the BF12 is “washed” in comparison to the BF5. Also I need to use a much lower exposition time with the BF12 than with the BF5.

Here are a couple of images comparing the Coronado BF5 and the Lunt BF12. 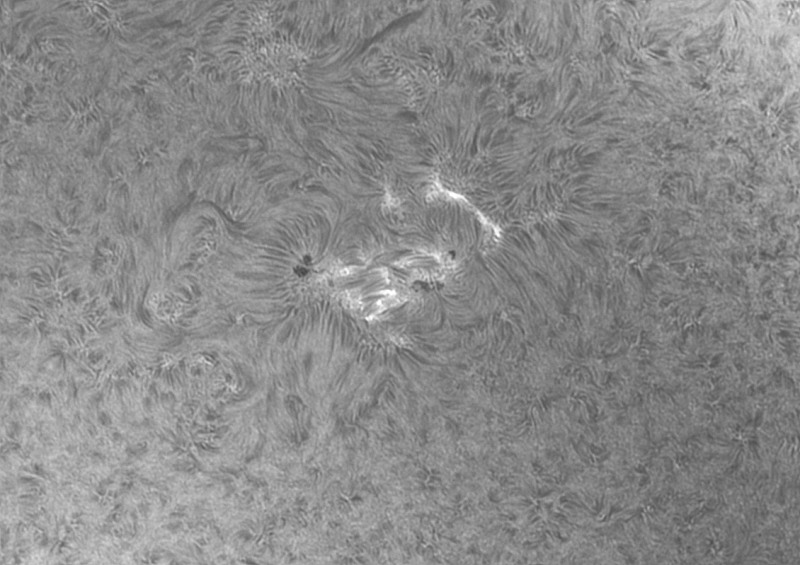 Here’s the Coronado BF5 one:

No particular post processing has been made other than sharpening and adjusting brightness/contrast. They are bpth not so good by I prefer the BF5 one.

I also briefly tested the “CaK” filter (single stack for now) and I’m very happy with it. Surely not a real CaK filter but it’s good in emphasize faculae areas.

This is the result of my first test.

Well I coloured in violet but definetly not worth to be called a real CaK image 😀 Let see if stacking and tilting a second filter the bandwidth gets smaller.

Another thing I tested (finally) is the light imaging setup. Very happy with it! 🙂 I tested it briefly in white light and it works as expected. Quality is also good. Even the video ones. 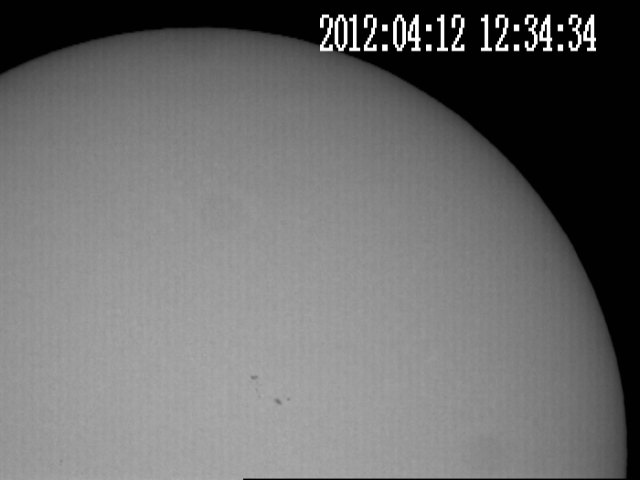 The image has been taken with the Sony XC-ES50. It has vertical artifacts coming from the different resolution of the mini DVR and the camera. I checked the Pulnix TM-6CN doens’t do that. Next time I’ll use it instead of the Sony.

Finding the right exposure setting wasn’t that hard. I take the gain to minimum and play with DIP switches for the exposure times. That’s it.

And here is a totally new thing for me: spectroscopy. Yesterday I decided to build a USB spectroscope using a cheap 1000 lines diffraction grating, a slit made with two razor blades and a PC colour webcam. I used RSpec to the do the capture and the analysis of the lamp I have on my desktop and here’s the result.

With that cheap setup (around 35 Euros total costs) I’m able to reach a 8A/pixel. Probably I can even do better by tweaking things a little but so far it’s good.

I want to use it mainly to test filters. Now I need a full spectrum lamp and I’m done 😉

That’s all and it’ll be so for the next days as the weather man says more rain is coming ;(